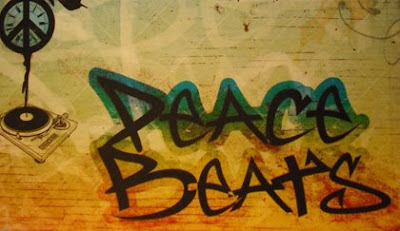 Firas Safa, aka l'Fahrass, is 17 years old and raps in three languages. The message is the same in all of them: Entifada lal salem, revolution pour la paix, a revolution for peace. His friend Omar Zeinedinne - Mista Dee - aged 25, says that, "in general, hip hop is the voice of the oppressed," but the Lebanese don't rap about racism, "we rap about war." Lebanon is a long way from the streets of America where hip hop began and here, its concerns are very different. In the US, worries rumble on that rappers glorify violence, but here, while Lebanon's burgeoning hip hop movement is influenced by American rappers, the young, angry artists have a passionate message of peace.
"I see [rapping] as a mission to improve Lebanon," says Firas, in a documentary called Peace Beats, which follows the story of a US Aid-sponsored project, Hip Hop for Peace. Raffi Feghali, the project's manager, explains that, "Basically it started with the goal of taking a group of hip hop artists and transforming them into messengers of peace." A long-term hip hop fan, Raffi, who wears a white tip-tilted trilby, explains that he had made himself aware of every hip-hop artist in Lebanon, and when he managed to secure funding for Hip Hop for Peace, invited a group of them to participate in a camp in Broumana, which, "included training for these artists in conflict resolution," and encouraging them to come up with advocacy tools. One of these tools, he said, was the CD that the group produced, featuring tracks by all of them and focussing on the theme of peace, and hip hop nights organized by the artists themselves. They sound great, too. The gigs they have done have been full of energy.

"Why hip hop?" says Raffi. "Because it is on the rise in Lebanon. It is the language of the youth and we are trying to target youth."

Although it started as an imported genre, largely listened to by university students, the middle classes with access to foreign culture, Raffi now says that it is increasingly popular, "among poor people. It is accessible for ordinary people." The Peace Beats documentary shows tensions running high as the artists - from all religions and backgrounds - struggle to convince one another to overcome their differences, but they now seem enthused about their message and, "it is a group of amazing guys - and a girl," says Feghali, "I expected that we would have a hard time managing the group but they proved me wrong." There are, he explains, Lebanese in the group, an Armenian and several Palestinians. A lot of the artists are teenagers, and the documentary's footage of a Christian girl going to a Palestinian camp in Lebanon to work with a friend, and explaining that her parents would be furious if they knew she was there, is touching and impressive.

As the Palestinian cause has been pushed to the fore in recent weeks by the mass bloodshed in Gaza, Lebanon's hip hop artists are heading a fundraising event. As Firas says, "we decided to do this because of what is happening in Gaza. We are not supporting Hamas but we want to support the kids dying and the women dying. We wanted to do something that was art - the protests are getting nowhere." Palestinian hip hop, as recent documentary Slingshot Hip Hop showed, address frustration at conflict and calls for peace, like the Peace Beats crew. Though Firas has not yet seen the film, he likes it before seeing it, "cos that's what hip hop is all about, speaking your mind," he says.

The event, was scheduled for January 24 2009 (at 5pm at Madinah Theatre, Hamra), featured l'Fahrass and other artists Malikah, Fari' l-Uturuch and Palestinian refugees I-Voice. Stand-up comedian Mazen Abdallah was there, poet Diala Ahwach performed her work about Gaza and the Rek Crew worke together on peace-themed graffiti art.

"They say if you want peace," says Firas, "you've got to prepare for war. That's what we're doing; a war. Our weapon is the pen and the paper, and our Ideology is based on revolutionary art and poetry. We think hip hop is revolutionary music which can lead to peace, by saying what we want to say, so everyone will listen."

This is the blog for achtART.com, an e-commerce website for Lebanese Arts and Crafts.

If you are an artist interested in showcasing your work on the achtART.com website please email webmaster@achtart.com.